similarities between the Matsya Purana of ancient India and the Old Testament of Judo Christianity. 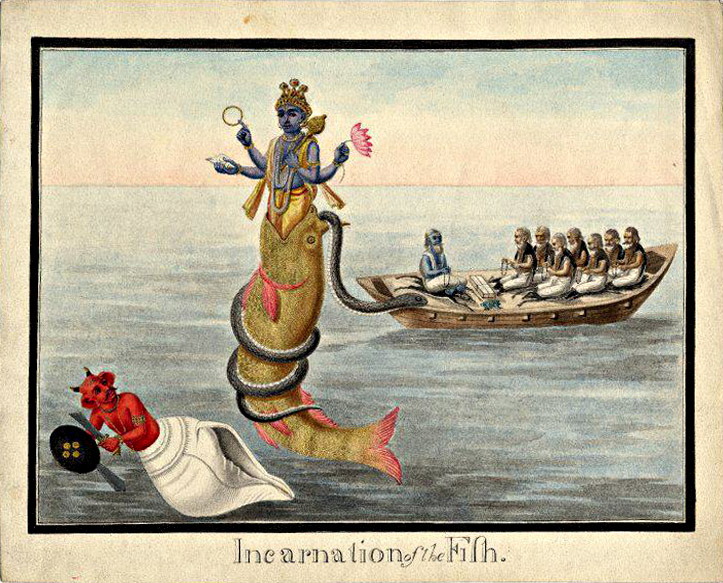 The Matsya Purana talks of the story of the king Manu who decided to live a quiet life near a river. One day when he washed his hands in the river a little fish asked him to save him from the big fish saying that it will one day save him in return. Hence King Manu (also known as Satyavrata) put the little fish in a jar. After a few days the fish grew and the king transferred the fish to an urn. It grew even more and had to be transferred to a pond, then a river and finally it was moved to the ocean. When it was put in the ocean the fish asked the king to build a boat and take along with him all types of seeds, eggs, animals and birds. King Manu realised that this was no ordinary fish but was the avatar of Lord Vishnu himself. Subsequently there was a great deluge and the fish with a horn came to King Manu. The King tethered his boat to the horn of the fish using Adisesha the serpent and the fish took King Manu to Mount Mandara. All the living creatures on the earth were wiped out by the deluge except King Manu and the creatures in his boat.

Genesis 6, of the old Testament says that Lord was unhappy with the wickedness of mankind and requested Noah to build an Ark. The Lord told Noah “of very living thing of all flesh, two of every sort shalt thou bring into the ark, to keep them alive with thee they shall be male and female”. Hence Noah built a huge ark and took into the ark seeds and a pair of every living creature. Then there was a deluge which lasted for several days. Noah took his ark to the top of Mount Ararat. All creatures on earth were destroyed by the deluge except Noah and the creatures in Ark.