Witnesses to the Unsolved, Prominent Psychic Detectives and Mediums Explore Our Most Haunting Mysteries 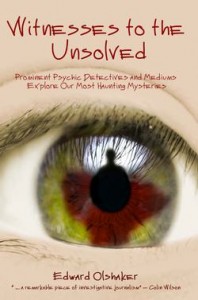 Another intriguing book, which has recently come out in a paperback edition.

Witnesses to the Unsolved: Prominent Psychic Detectives and Mediums Explore Our Most Haunting Mysteries.

This is particularly interesting because the author, Edward Olshaker, focuses on a group of comparatively modern cases. From the publisher’s website (Anomalist Books):

—Martin Luther King, Jr., whose assassination is still an open case after a Memphis trial and a federal investigation reached opposite conclusions in 1999 and 2000.
—Vincent Foster, the White House deputy counsel found shot to death in 1993. Three-quarters of Americans polled in 2000 did not believe the official ruling of suicide.
—Kurt Cobain, the voice of his generation whose death by shotgun triggered scores of “copycat suicides” worldwide, even though America’s leading forensic pathologist maintains that the rock icon, with triple the lethal dose of heroin in his body, could not have shot himself.

I wasn’t aware, for instance, that the trial for the murder of Martin Luther King, Jr. and the federal investigation reached opposite conclusions.

EDWARD OLSHAKER is a longtime freelance journalist whose articles and commentaries on current events and historical issues have appeared in History News Network, The New York Times, The Gainesville Sun, and numerous other publications. He broke the story of Florida prisoner John Merritt’s alleged wrongful murder conviction and quest for DNA testing and a new trial. Witnesses to the Unsolved was an Independent Publisher Book Awards finalist and a ForeWord Magazine Book of the Year finalist.

Preface to the New Edition

Chapter 8: Through the Looking Glass—The Bizarre Disappearances of William Colby and John Paisley