Last 11th of April 2012 a troupe of ITALIA1, national broadcasting italian TV of Mediaset Group, for the program MISTERO interviewed Enrico Baccarini, Co-Editor in Chief of SECRETA Publishing, about Cistercian Abbey of San Galgano (at Montesiepi, about 19 miles, 30 km, southwest of Siena) and the mysterious Sword in the Stone. 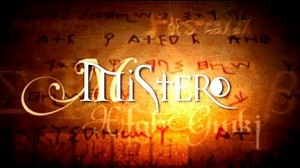 The sword in the stone has been plunged  by San Galgano into the rock emerging on the top of the hill in 1180. To honor the Saint, around it has been built a lovely round church. Only the hilt and a few centimeters of the blade protrude from the rock in the shape of a Cross. 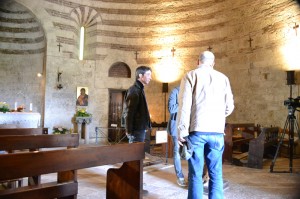 Enrico Baccarini (left) during the interview

The sword has been considered a fake for many years, but a metal dating research in 2001 by the Siena University has indicated it has medieval origins. The composition of the metal doesn’t show the use of modern alloys, and the style is totaly compatible with that one of a 12th century sword. 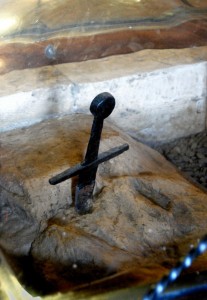 The Sword in the Rock inside Montesiepi Church

To symbolize his rejection of war, Galgano plunged his sword into the rock, which miraculously “parted like butter”, leaving only the hilt exposed to form the shape of the Cross. 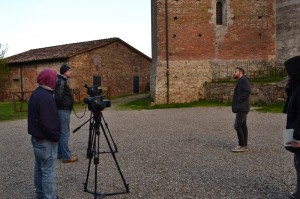 The mysterious “sword in the stone“, thrust into a rock, for many scholar proves that the legend of King Arthur’s Excalibur originated in Tuscany, not Cornwall or Britain. 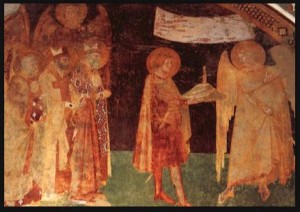 The original nucleus of the monastic complex Cistercian of Saint Galgano (Galgano Guidotti 1148-1181) is constituted by the hermitage of Montesiepi, built in Roman style as mausoleum of the Saint between the 1182 and the 1185.  It encloses, beyond to the tomb of the saint, the famous rock with the sword.